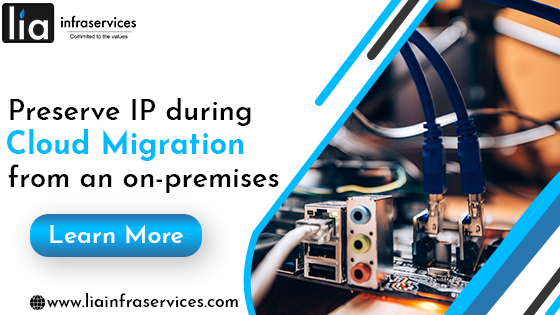 How to preserve an IP address during cloud migration?

There are few legacy applications that were developed and implemented into an on-premises server with some hardcoded parameters such as IP address and its properties. Use hard-coded IP address to access applications.

How to Preserve an IP address during cloud migration?

Cloud being the ultimate destination for companies to migrate their servers from on-premises to cloud without downtime. It is necessary to preserve an IP address during migration to take advantage of the cloud & its benefit.

Slowly the organizations are also considering moving their data centres into the cloud to avoid the in-house data center hardware and software license renewals. To know more about the necessity of cloud migration, click here.

For the application with hardcoded IP, It’s pretty obvious to have a similar network configuration with identical Network CIDR and more importantly same IP for the VM on the target cloud.

What are the cloud migration challenges?

There are multiple challenges a cloud migration has, such as data transfer speed, unsupported network driver for the target cloud, and many more.

But, for our use-case to have an identical IP address into the target VM, which helps to preserve the hardcoded IP of the application,

This identical network and the same IP for the target VM would have another potential issue of IP conflict during the cloud migration.

How to prevent the target VM to conflict with the production server?

The one potential solution to prevent any IP conflicts or AD confliction is to isolate the target VM.

To isolate a VM, it’s necessary to create an isolated network with sufficient rules enabled to restrict access to the production environment.

For the public cloud, it’s relatively simple to isolate the network with a proper Network Security Group.

For the public cloud like AWS & Azure, the network can be isolated by preventing any outbound traffic to the source environment CIDR range.

To avoid any future issues because of cloud migration, it is recommended to prepare a proper strategy, the strategy involves multiple test migrations into the cloud with different applications and use-cases.

I have seen a successful cloud migration into AWS, where the customer was unable to open the application as it was dependent on another server on the source environment.

So, the strategy of cloud migration could have been to migrate both the servers at the same time using the bulk migration feature and link both the servers into the new network and point the application to see the dependent server.

Being into the threat of data stealing and attack, few of the mission-critical servers need to be in an isolated network restriction,

So, to migrate any servers into this isolated network is tough work, which needs a lot of preparation and planning before starting any production server migration.